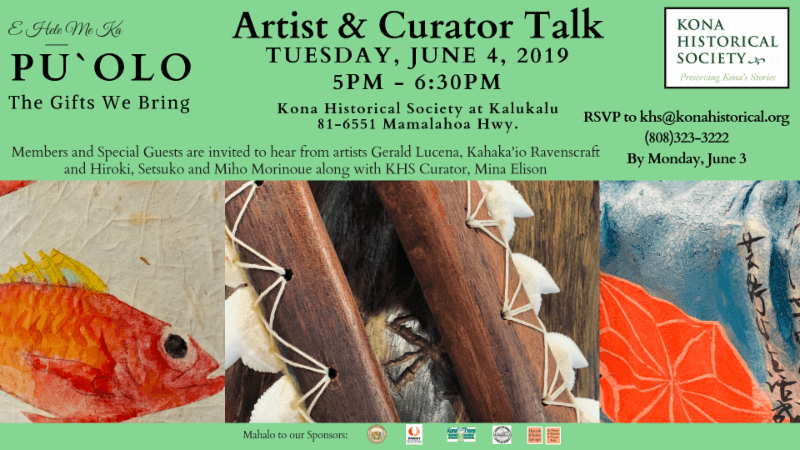 Pu`olo: The Gifts We Bring Artist & Curator Talk Tuesday, June 4, 2019 5:00pm to 6:30pm Kona Historical Society is pleased to present an artist and curator talk for

With a background in anthropology and conducting oral history interviews, Mina aims to utilize the voices of the people-in their own words-to tell stories in exhibits she curates. Earning an M.A. in Museum Studies from New York University, Elison has worked with organizations such the American Indian Community House Gallery and Japan Society in New York City, as well as The Contemporary Museum, Honolulu. Mina Elison is currently the Curator at Kona Historical Society in Kona, on the island of Hawaiʻi, and serves on the Board of Directors for Keōua Hōnaunau Canoe Club and the Association of Hawaiʻi Archivists.

Gerald Lucena was born and raised in Captain Cook, Hawaii. He has degrees in various artistic mediums from the University of Hawai’i at Manoa, State University of New York at Stony Brook and the Skowhegan School of Painting and Sculpture in Maine. Since then, he has exhibited in Hawai’i, California, and Massachusetts and has created public murals for the West Hawai’i Community Health Center in Kealakekua and Innovations Public Charter School in Kailua-Kona. Gerald often lends his talents to community organizations such as the Aloha Theatre and the Donkey Mill Art Center.

A native of Hawaiʻi, Hiroki Morinoue has worked in a variety of media and received numerous awards for outstanding work in his field over the course of more than 40 years. In 1973 he received his BFA from California College of Art with high honors, and studied Sumi-e Painting and Mokuhanga Printmaking in early 1980s. Hiroki is one of the founders and the volunteer Artistic Advisor of Donkey Mill Art Center, the home of Holualoa Foundation for Arts & Culture. He was designated a Living Treasure of Hawaii by the Honpa-Hongwan-ji Mission in 1996, also awarded as the Distinguished Artist by Honolulu Printmaking Organization on their 85th Annual Exhibition and Honolulu Japanese Chambers of Commerce in 2013.

Miho Kanani Morinoue is a Hawaii-based artist living in Hōlualoa, Hawaii. Raised by two visual artists, Hiroki and Setsuko Morinoue, she has an extensive background in both art and dance. She has had a 10-year career with Complexions Contemporary Ballet Co. in NYC. Her art can be found in the collections of the Library of Congress, DC and the Whitney Museum of American Art, NY. Currently she teaches dance at the Kona Dance and Performing Arts and is the Youth Program Director for the Donkey Mill Art Center.

Born in Kanagawa, Japan, Setsuko Morinoue nee Watanabe began her interest in art through photography in high school, and later became interested in fiber art in Kusaki and Roketsu-zome, Japanese natural dye with wax resist. She moved to the Big Island of Hawaii and married to Hiroki Morinoue in 1970. Since then her persistent interest and appreciation in various art media lead her to clay with paper, mixed-media painting and printmaking in both 2D and 3D works. Her works have been exhibited internationally is in numerous private and public institutions. She is one of the key-founding members of Holualoa Foundation for Arts and Culture (HFAC), a nonprofit organization, for arts and cultural education for all ages and abilities.

Residing in the district of South Kona, Hawaiʻi, the artist holds generational ties to the wahi pana of Napoʻopoʻo and Keʻei. The sacred places built upon those lands inspire the author to steward and perpetuate the ancestral traditions through the practice of kālai lāʻau – traditional wood shaping – and the keeping of mo`okuauhau – genealogies and history.

This exhibit is supported through a grant from the Hawaii State Grant in Aid Program. Space is limited for this event, so please email khs@konahistorical.org to RSVP. Kona Historical Society is a community-based, nonprofit organization and Smithsonian Museum affiliate that has spent the past four decades collecting, preserving and sharing the history of the Kona districts and their rich cultural heritage within Hawaii.